Enjoy some gorgeous Irish tunes performed by folk artist, Laurel Brauns. With four albums under her belt, Laurel has embraced a life in the rivers and out on the road, with equal time spent performing around the campfire for fellow rafters and on big stages with the likes of the Portland Cello Project, Weinland, Horse Feathers, and Joan Osborne. RSVP required for overnight lodging guests to claim complimentary seats. Book your stay here, and then for your tickets, email info@thesuttlelodge.com no less than 72 hours prior to the show with your lodging confirmation number. Proof of vaccination and picture ID required at the door. Doors at 5:30. Show starts at 6pm. Food & Drink available from our Skip Restaurant during the show. 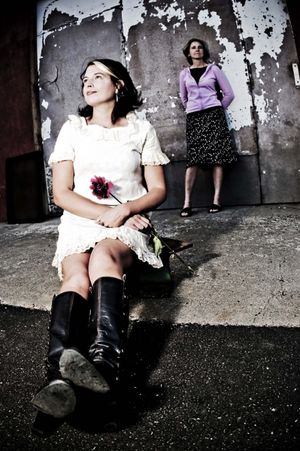 Laurel Brauns’ voice can strike you like sunlight shooting through a hundred bits of stained glass. In certain moments it’s a multi-hued tremolo, colored with an indefinable accent from… from… from someplace cool and northern -- like the peaty glow of Scotch whisky -- like the singing of a Druid.

With three out of four grandparents from the “olde country” (Ireland), and a lifetime exploring the mountains and rivers of New England and the Pacific Northwest, this indefinable accent is part of the essence of her music. It is rooted actual hyperborean experiences: following the Appalachian Trail through the snow, plunging down the rivers of Oregon and Idaho in a white water kayak in spring waters, and sleeping under the stars by a myriad of alpine lakes, filled with icy mountain run-off.

With four albums under her belt, Laurel has embraced a life in the rivers and out on the road, with equal time spent performing around the campfire for fellow rafters and on big stages with the likes of the Portland Cello Project, Weinland, Horse Feathers, and Joan Osborne.

Laurel has toured both coasts for over a decade, on the college and coffeehouse circuits and in little mountain towns where she always finds new friends and old. She found a place to call home in Bend, Oregon, where she has lived for the past twelve years. In the summers she often performs with her side project "The Ashlings" at weddings and private events throughout the state.

Laurel's fourth album, House of Snow, encapsulates themes of sustainability and reverence for the outdoors in a beautiful collection of songs, produced and arranged by Douglas Jenkins, the creative director of the Portland Cello Project.

Featuring some of Portland’s finest musicians including Jenny Conlee of the Decemberists and Sam Cooper of Horse Feathers, “House of Snow is an indie-folk gem, drawing on the folk rock sounds that have all but dominated indie music in the Northwest for the past few years. Brauns’ folk sensibilities shine through an orchestral tapestry as brightly as her trademark streak of blonde hair,” said Mike Bookey of The Source Weekly.

Chris Dahlen of Pitchfork.com and Paste Magazine chimes in, “Laurel Brauns writes some of my favorite songs, and the way she sings them makes me shiver.  Her new disc is lovely, strong, and haunted, and likely her best yet.” 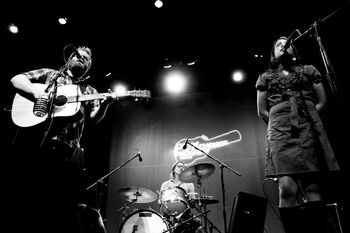 One night, after a great week touring the McMenamins circuit in Oregon, Laurel stayed up long into the night at Edgefield Winery with her friends Amy Mitchell (also her cellist), and Henry Abel, Amy’s boyfriend. The question was why more bands from Portland don’t make the trek over the mountains to Bend to play shows.

Henry had a plan; he would start a music series that would host Portland bands in Bend, at the Tower Theatre, the city’s finest music venue. The bands would be well paid and well fed; the catch was that they would have to come up with some sort of collaboration with musicians from Bend.

Over the next few months bands like Viva Voce, Talk Demonic, Laura Veirs and Blind Pilot graced the stage, and Laurel and Amy (aka the Sweet Harlots) opened for Horse Feathers and collaborated with Weinland and the Portland Cello Project. Later, Laurel would tour throughout the Pacific Northwest with the PCP and eventually work with Doug Jenkins, the creative director, on her latest album.

Check out this video from Laurel's show with the Portland Cello Project at the Tower Theatre below: